When Do You Switch A Dachshund Puppy To Two Meals A Day?

Are you wondering when you should switch a Dachshund puppy to two meals a day? Want to find out when your puppy should go from 4 meals to 3 meals and then down to 2? Here’s everything you need to know about how often you should feed your Dachshund.

When Do You Switch A Dachshund Puppy To Two Meals A Day? Dachshund puppies should be switched to two meals a day at around 6 months old and can then stay on this feeding schedule for life. However, if your puppy struggles with only 2 meals, keep them on 3 meals for a few months longer.

Read on to find out why your Dachshund puppy needs to be switched from 4 meals down to 2 meals a day, whether you need to feed less dog food, and why you shouldn’t let them graze on food all day.

This article is based on research and personal experience as a Dachshund owner of 10+ years. I am not a Vet or qualified dog trainer.

When Do Dachshund Puppies Switch To Two Meals A Day?

This is how often a Dachshund puppy should be fed according to their age:

Dachshund puppies that are 8 weeks to 4 months old should be fed four times a day.

Ideally, your Dachshund puppy should be fed at around 7am, 10am, 2pm and 5pm

You want your Dachshund puppy’s meals to be well-spaced out throughout the day and to follow the same daily routine.

Feeding four times a day is best for your puppy’s digestion and helps keep his blood sugar stable during the day.

Very young Dachshund puppies grow rapidly in the first few months. They need their dog food to give them all the calories and nutrients they need for growth.

Feeding your Dachshund puppy at regular intervals is so important in those early days. That’s because this is when the development of bones and muscles takes place.

When your Dachshund puppy reaches four months old, it’s time to switch them down to three meals a day.

You still feed the same amount of puppy food as before. But just divide the recommended daily food allowance into three meals, rather than four!

To make the transition from four to three meals easier for your Dachshund, it’s best to keep his breakfast and dinner at the normal times.

Then simply choose a time in between the previous middle two feeding times and make that the new lunchtime!

For example, you could feed your Dachshund puppy 3 meals a day at around 7am, 12 noon and 5pm.

These times aren’t set in stone, but you want to try and keep an even space of time between meals if you can.

It’s best not to feed your Dachshund puppy any later than about 6pm. Dogs don’t digest their food as quickly as humans do, and they need time to poop before bed.

From six months onwards, you should be able to switch your Dachshund puppy on to two meals a day.

For example, you could feed your Dachshund puppy breakfast at around 7am and dinner at around 5pm.

Again, these times aren’t set in stone. But you don’t want to feed your Dachshund too late into the evening as dogs take longer to digest their food than humans do.

At around the 6 month mark, you may find your Dachshund puppy naturally starts to turn his nose up at lunch or simply stops eating it at all.

So, if you notice your Dachshund isn’t as interested in his lunchtime meal as he was, then it’s probably time to start feeding him twice a day.

To switch your Dachshund puppy from 3 meals a day down to two meals, you can gradually lessen the amount you feed your puppy for lunch.

It’s best to do this over about 10 days so the food in your puppy’s dog bowl just gradually becomes less and less over time.

Alternatively, you can simply stop giving your Dachshund lunch one day and just continue on without it!

However, most Dachshunds are greedy and some may not be happy with this new arrangement!

So, you may have to offer a lunchtime snack which could be some fresh vegetables or a couple of dog treats just to keep him going until dinner time.

What If My 6 Month Old Dachshund Puppy Still Wants 3 Meals A Day?

If you find your Dachshund can’t live without that extra lunchtime meal and constantly begs for food, then keep the 3 meal routine going for a bit longer.

Feeding your Dachshund puppy 3 meals a day until he’s 9 to 12 months old, won’t do him any harm. As long as you’re not overfeeding of course!

You still need to stick to the recommended daily food allowance for your Dachshund’s weight and age.

In the majority of cases, Dachshunds should be fine on two meals a day by the time they’re around 6-9 months old.

However, some Dachshund owners prefer to add in a very small lunchtime snack and may continue to do this longterm.

Can I Feed My Dachshund One Meal A Day?

No, it’s not recommended to feed your Dachshund just one meal a day. Dachshunds over 6 months old should be fed at least 2 meals a day.

Just like humans, Dachshunds need food for fuel and to keep their blood sugar stable throughout the day.

Even if you feed your Dachshund a very large portion for breakfast, he’ll still digest it by dinner time and be ready to eat again.

Your Dachshund will simply be too hungry and may also feel irritable if he’s only fed one meal each day.

Do I feed My Dachshund Puppy Less Food When I Switch To 2 Meals A Day?

No, don’t feed your Dachshund puppy less food when you go down to 2 meals a day.

You still need to feed your Dachshund puppy the recommended daily food allowance for their weight and age.

This means that the food your Dachshund puppy would have previously had at lunch will be equally distributed into his breakfast and dinner meals.

So, you’re basically feeding your puppy the same amount of food, but just feeding him less times each day.

Why Do Dachshund Puppies Need To Be Switched To 2 Meals A Day?

Between 8 weeks and 6 months old, Dachshund puppies have a huge growth spurt.

At around six months old, they stop growing quite as quickly, so it won’t be necessary to feed them quite as often.

Your Dachshund puppy won’t be burning energy as quickly or growing as much as he was before.

Even though Dachshunds can be switched to two meals at the young age of six months, some larger dog breeds may need to wait until twelve months or longer.

Can I Let My Dachshund Puppy Graze On Food Throughout the Day?

No, it’s not a good idea to leave food out in your Dachshund’s bowl to let him graze on it throughout the day.

However, there are a few reasons why it’s better to have scheduled feeding times than to fill a bowl and let your Dachshund puppy graze:

Your Dachshund’s body will prefer a routine

A regular feeding schedule twice a day will mean your Dachshund’s body is accustomed to a feeding routine.

This can be very beneficial for your Dachshund’s digestion and metabolism.

Feeding routines help with potty training too. If you know when your Dachshund eats, you’ll know when he needs to poop too.

A feeding routine adds stability to your Dachshund’s day

There might be some changes at home throughout your Dachshund’s life. This could include moving house, going on holiday, or new additions to the household.

A regular feeding schedule helps bring consistency into your Dachshund’s life. Which can actually help your Dachshund adjust to any change in future.

If you have a regular feeding routine for your Dachshund, you’ll be able to quickly tell if he suddenly stops eating his food.

If your Dachshund is simply grazing from the bowl, you might not notice that his appetite has gone.

Not eating is a common first sign of illness! And feeding on a regular schedule will help you to quickly spot whether your Dachshund is unwell.

Should My Dachshund Puppy Still Be Eating Puppy Food At 6 Months Old?

Yes, when you switch to 2 meals a day at around 6 months old, your Dachshund puppy should still be eating puppy food.

If you want to find out when you should switch your Dachshund from puppy to adult dog food, then click here!

So, there you have it! Dachshund puppies should go down to two meals a day at around 6 months old and can stay on this feeding schedule from then on. However, if you have a puppy that struggles with only 2 meals, just keep them on 3 meals for a few months longer!

If you read all the way to the end of this article, you’re exactly the sort of person I’d LOVE to join my Facebook Group. Your support for my blog means everything to me so, if you found this article helpful, please kindly share below. Thank you! 💋 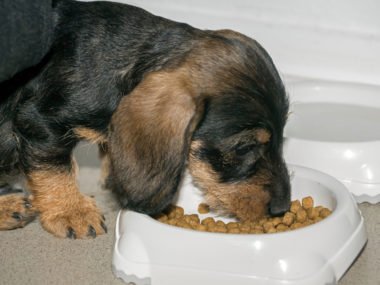 Read More
Are you thinking of getting a dachshund and wondering what to feed him? Or perhaps you want to…
Read More
15
0
4 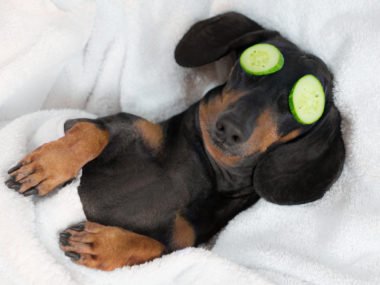 Read More
Is your dachshund’s coat looking a bit dull and out of condition? Does he need professional grooming, or…
Read More
3
0
1 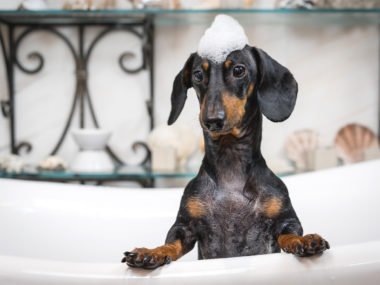 Read More
Is your dachshund’s coat starting to look oily or grubby? Have you noticed a doggy smell lingering in…
Read More
19
0
3 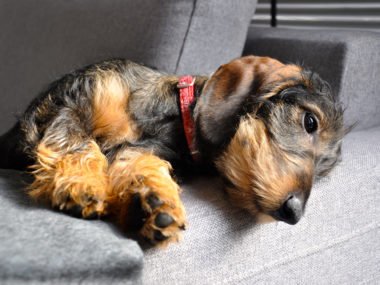 Read More
Are you thinking of getting a dachshund but want to know if they shed? Maybe you have allergies…
Read More
28
0
27 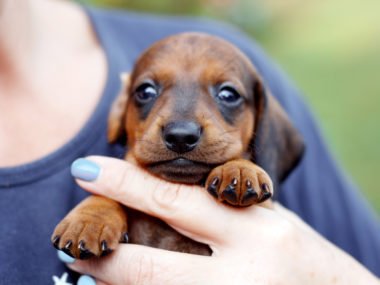 Read More
Are you thinking of getting a dachshund puppy or adopting a young dachshund? Are you wondering what you’ll…
Read More
54
0
9 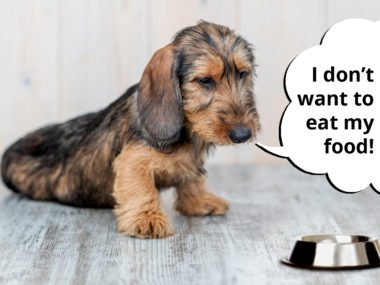 Read More
Has your dachshund suddenly stopped eating? Is he acting strange around his food bowl? Are you worried and…
Read More
24
0
0