Are Dachshunds Easy to Train?

Are you wondering how easy is it to train a dachshund? Or what basic training you need to do with your dachshund puppy? Maybe you’ve adopted an adult dachshund and want to know if it’s too late to start training them? We’re going to answer all your questions about dachshunds and training.

Are dachshunds easy to train? No, but if you put in the time and do it consistently, it gets much easier. Dachshunds have a reputation for being really hard to train, but you just need to be patient. Your dachshund needs to know you’re in charge and he has to listen. Once he’s got that, training is easier.

If a dachshund has just joined your family, you’re probably thinking about doing some training. Read on to find out where to start, if dachshunds can be trained, what training you need to do, and whether old dachshunds really can learn new tricks!

This article is based on research and personal experience as a Dachshund owner of 10+ years. I’m not a Vet or qualified dog behaviourist.

Why are dachshunds hard to train?

Dachshunds were originally bred as hunting dogs to follow scents and chase down badgers. They were raised to think on their own. This independent streak made them stubborn. In fact, they’re one of the most stubborn dog breeds, making them hard to train.

Can dachshunds be trained?

Yes, dachshunds can definitely be trained. Puppies are much easier to train than adult dachshunds, but, even if your dachshund is an adult, you should still be able to make progress with a positive and consistent approach. Potty training and excessive barking are the most challenging areas of training.

Positive reinforcement is the best way to train a dachshund. This means rewarding good behaviour with treats and praise, and ignoring or calmly correcting any bad or undesirable behaviour. Basically, dachshunds are much more likely to potty outside if they get rewards and praise for doing so. They then associate pottying outside with tasty treats and fun.

Shouting at your dachshund for weeing indoors will just scare and confuse him. It could even lead to frustration, anxiety or aggressive behaviours further down the line. Building a positive bond with your dachshund will make him a more confident and independent dog.

Make sure you’re really patient and consistent with your dachshund. It’s no good training him not to go on the sofa one minute and then letting him up for sofa snuggles the next – he’ll end up totally confused. Decide what you’re going to allow your dachshund to do and stick to it.

Dachshunds are hilarious and will do naughty things just to get your attention. So when they’re young, you do need to be a bit firmer with them. This doesn’t mean shouting or scolding. This means sticking to your guns and giving calm but clear corrections. Dachshunds are wilful and independent spirits, which is why we love them so much, but it’s also why you need to be consistent with training! Your puppy needs to know you’re in charge and that he’s not in charge of you or anyone else in the family.

When you get a puppy, it’s best to take a few weeks off to start the new routine. Or make sure there’s someone calling in to help you with the training. Anyone that looks after your dachshund should also follow the same approach so his training doesn’t get mixed up. Basic training can take a few months, so someone will need to be around to help your puppy settle and learn the ropes.

Keep your dachshund’s training sessions nice and short. Sausage dogs have short attention spans and young pups need their rest. About 10-15 minutes at a time is perfect. And repeat the sessions 3 or 4 times a day until he gets the hang of it.

Dachshunds are easily distracted by people, animals, smells and sounds! So start your training in a quiet room with no one around. You want your dachshund to be focussed solely on you – not the squirrel on the fence! Once he’s mastered the basics, move into the garden and continue training out there. In time (and after all jabs), progress to the local park where there’s more distractions, people and other dogs around.

Dachshunds pick things up fast, but don’t overwhelm him with too many commands at once. If you’re trying to teach too many new things, he may get muddled or confused with all the verbal cues. Keep it simple and make sure he’s nailed the first command, before moving on to the next.

Make the training fun so your dachshund enjoys learning and getting things right. Once he’s picked up a new command, don’t stop there. Keep working on it at random intervals. This’ll keep him on his toes and remind him who’s in charge (that’s you by the way, not him!). Doing a bit of training each day is a great way to stop him getting bored and the perfect way to bond with your dachshund.

Get out and about

If you get your dachshund used to being around other dogs from a young age, he’s less likely to develop bad behaviours, like barking or being aggressive towards strange dogs when you’re out on walks. If you have friends or family with dogs, start by joining them for short walks (after jabs of course) and gradually build up to having play dates together.

Just make sure you introduce both dogs the right way, so you spot any signs of nervousness or aggression. Don’t worry if you don’t have any doggy friends. Another great way to socialise your sausage is to join a dachshund Facebook group where they organise regular walks.

Teaching your dachshund new things should be an ongoing thing. Dachshunds are smart and love using their brains. So, once you’ve mastered the basics of training, move to the next level. Instead of asking your dachshund to fetch a toy, ask him to fetch a specific toy or item by name.

How do you discipline a dachshund?

The best way to discipline a dachshund is to ignore him. Dachshunds hate it when they don’t get attention. So, if he does something wrong or undesirable, the best thing you can do is leave the room or look the other way. He’ll hate you doing this, but it’s a much more positive way to correct any bad behaviour than shouting or scolding him.

What age should you start training a dachshund puppy?

Start training your dachshund puppy when he’s 8–12 weeks old. If you’ve only just got him, give him a few days to settle into your home. This is the perfect age for him to learn basic commands like ‘Sit’, ‘Stay’ and ‘Down’. Just remember to keep sessions short so you don’t overwhelm him.

What are the best training treats for a dachshund?

The best training treats for a dachshund are chunks of carrot or cucumber, small cubes of cheese, small bits of chicken, dried fish sprats, kibble, chopped hotdogs or shop bought training treats. You may need to give your dachshund quite a few treats to start with, so use something small, healthy and natural.

Only use high value treats like ‘cheese’ for very special occasions or when you’re teaching a new command. Use different treats too, so your dachshund doesn’t get bored of them. You can also use praise and fuss because this can be reward enough for some dachshunds!

How do you train a dachshund that isn’t food motivated?

If your dachshund isn’t motivated by food, use praise or give him a new toy. Playtime is a big motivator for a dachshund, and they love things like balls or squeaky toys (the louder the squeak, the better!). You can also change the tone of your voice to show your dachshund when he does something right.

What training do you need to do with a dachshund puppy?

The basic training you need to do with a dachshund puppy is:

What commands can you teach a dachshund?

These are some of the commands you can teach a dachshund:

You can also teach a dachshund to roll over or sit up like a meerkat, but you do have to consider their back. Sadly, 1 in 4 dachshunds are prone to Intervertebral Disc Disease (IVDD) so be mindful of this when teaching new commands or tricks.

Can you train an older dachshund?

Yes. It’s possible to train an older dachshund, but they’re stubborn by nature so it can be more difficult. You need to be consistent, reward him for good behaviours (with treats and a big fuss), and correct him when he does something wrong (by saying a firm ‘No’).

If you ignore bad behaviour and praise good behaviour, you should make progress over time. You may not be able to train out all his bad habits, but should be able to work with him on some of them. Besides, the very act of training your dachshund and getting him to listen can give you much better control over him generally.

So, there you have it. Dachshunds are stubborn and training isn’t always easy, but with time, patience and consistency you really can get there. The trick is to start when they’re young, set boundaries and stick to them. Don’t cave at the first sight of puppy dog eyes, and you’ll end up with an adorable little dachshund that knows what he SHOULD do – but may not always choose to do it!

Read More
Are you wondering how much exercise your dachshund needs? Perhaps you want to take him walking, running or…
Read More
45
0
25

Read More
If you can’t hear yourself think over the sound of your dachshund barking, you aren’t alone! Dachshunds may…
Read More
256
0
20

Read More
Have you got a new dachshund puppy? Do you have an older dog who can’t seem to get…
Read More
118
0
53

Read More
Why do dachshunds love rolling in poo? And why do they feel the need to smear it all…
Read More
3
0
1

Read More
Have you just got a new dachshund puppy? Are you wondering if crate training is a good idea?…
Read More
14
0
5 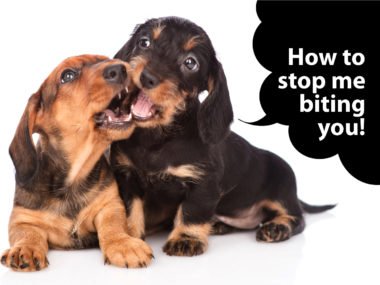 Read More
Do you have a new dachshund puppy? Is he mouthing, biting or nipping a bit too much? Maybe…
Read More
40
0
3