Can Dachshunds Be Left Alone All Day?

Are you thinking of getting a dachshund but don’t know if he’ll be ok while you’re at work? Or maybe you already have a dachshund and need to go out for the day. Can he be left alone? How long for? We’re here to answer your questions.

Can dachshunds be left alone all day? No. You should never leave adult dachshunds alone for more than 4 hours at a time. They need the toilet every few hours and daily exercise too. As pack animals, dachshunds can get bored, lonely and stressed on their own.

Looking after a dachshund when you have to go to work is tricky, especially if you can’t work from home or take him with you. Read on to find out how long dachshunds can be left alone, what issues you might have when your dachshund is home alone, and how to keep him happy while you’re at work.

How long can you leave a dachshund alone?

Ideally, you shouldn’t leave your dachshund alone for more than 4 hours at a time. Much longer and he’ll probably get lonely, bored, stressed and be desperate for the loo. It’s absolutely NOT ok to leave a dachshund alone all day while you go to work.

Obviously you can’t always work from home or take him with you, so you’ll need to make some arrangements to ensure he has someone looking after him or checking in on him every few hours.

This is what your dachshund needs:

Dachshunds have small bladders and need to go out to pee every 4 hours or so. It’s really unfair to make them hold it much longer. Your dachshund will be very uncomfortable and may have an accident. Or, worse, could develop a urinary infection or kidney problem. Dachshund puppies have even smaller bladders and will need to pee every 2 hours (more if they’re not housetrained yet).

Exercise and mental stimulation are so important for your dachshund’s wellbeing and you need to make sure he gets enough every day – even on days when you have to work. Miniature dachshunds need at least 30 minutes and standard dachshunds need 60 minutes or more.

Food is very important to a dachshund. They’re greedy dogs by nature and like their dinner on time! You can’t just leave food in his bowl in the morning and expect it to be there 5 minutes later. Most dachshunds will immediately eat whatever is in front of them. So, if you’re out of the house all day, you’ll need someone to call in to walk and feed your dachshund.

Dachshunds are very sociable and crave your attention. They may get lonely or even depressed if they’re on their own all day. You need to make sure you put aside time to give your dachshund your undivided attention and make him feel loved.

Can I leave a dachshund puppy alone all day?

No. Dachshund puppies need even more looking after than adult dachshunds. You shouldn’t leave them alone for long until they’re housetrained and old enough. They won’t understand they can’t go to the toilet in the house and will mess on the floor.

It’s no good leaving your sausage pup in a pen either. He’ll just mess in it and any toilet training you’ve done will go out the window. If you have a new puppy, you need to be there with him or arrange for a friend or dog-sitter to look after him while you’re out. And please, whatever you do, don’t leave your dachshund crated all day! A puppy should only be in a crate for a few hours at most during the day.

Are dachshunds destructive when left alone?

Dachshunds can be destructive or feel anxious, stressed or bored if they’re alone too long. They may well do things you see as destructive like chewing or scratching, but they’re not being naughty – they’re just finding ways to cope on their own.

Some dachshunds chew the furniture or rip cushions to shreds, others bark and howl loudly, and some wee and poo indoors. These are all signs you dachshund isn’t coping at home on his own, and you need to do something about it. You should never tell him off for it – it’s up to you to help him feel calmer when left on his own.

The best way to do that is to NOT make a fuss when you leave the house and, although tempting, don’t make a fuss when you return either. Make it no big deal. And come back at set times during the day, as this’ll help your dachshund understand you’re always coming back. If you can get into a daily routine, it’ll be easier for him to know what happens and when.

Do all dachshunds get anxious when left alone?

No, not all adult dachshunds get stressed and become destructive when left on their own. Some will just settle down and sleep when you’re out, even for as much as 6+ hours a day. It very much depends on the individual dog and personality.

The best way to make sure he’s OK is to install an interactive pet camera – something like a Furbo – and check in on him during the day. You can then chat to your dachshund when you’re out and even give him a treat! Doing this should give you and your dachshund that extra bit of comfort and reassurance.

Leaving the TV or radio on helps too. As with humans, listening to any sort of background noise does take the edge off boredom and will keep him company. This should make him feel more calm and settled and also block out any outside noise that could potentially upset him.

If there are two dogs at home, that’s even better, especially if you’re at work for a number hours each day. Dachshunds are pack animals and want to live as part of a pack, regardless of whether that’s with people or other dogs. They’re much more likely to settle down and sleep if they have a doggy companion at home with them (although it does always depend on the individual dogs).

Does my dachshund have separation anxiety?

If your dachshund barks all day, wees or poos indoors, rips things up and chews on things when you’re not there, this could be a sign of separation anxiety. Dachshunds love being with people and can get really stressed when left alone too long.

This can be hard to spot because he’ll be fine when you come home and very happy to see you. And it’s hard to know if he’s been barking or howling all day because you’re obviously not there to see it happening.

You could video him, or speak to your neighbours about it and see what they say. If your dachshund is nervous about being alone, you can train him to feel calmer and more settled. Start by leaving him alone for short periods and gradually increase the length of time you leave him, making it no big deal when you leave or return.

Your dachshund may not have separation anxiety, he could just be bored. If he’s on his own for hours every day, he’ll look for ways to entertain himself. And ripping up cushions or chewing on your kitchen cupboards is as good a way as any to keep busy!

What can you do about boredom?

Well, a tired dog is a happy dog, so you need to make sure he uses up all his energy before you leave the house. If you tire him out with a walk before you go to work, he’ll feel a lot more settled and probably just curl up and go to sleep for a few hours.

Can I leave my dachshund while I go to work?

No, you can’t leave a dachshund alone all day. Dachshunds need plenty of attention, exercise, stimulation, playtime and love throughout the day. You could ask a friend or family member to call in while you’re at work during the day or use a dog-sitting service.

Pop home to let your dachshund out

If you’re already a dachshund owner and need to leave your sausage dog alone during the day, you could pop home at lunchtime to let him out and give him some attention. This should be fine – as long as he’s not left for more than 4 hours at a time. If this isn’t feasible, you’ll need to get someone else to look after him or check in on him.

Ask a friend or family to call in

Do you have a friend or family member who can take him during the day? Or do you know someone who can come round for an hour or so to break the day up? This would be ideal as he’ll know them already and should settle down nicely.

Another idea is to get a dog-sitter to look after him in your home while you’re at work. Or take him to a doggy day care centre near you. You just drop him off before work and pick him up on your way home (if he’s ok with other dogs, that is). If that’s just too expensive, you could always hire a local dog-walker to take him out for a walk and give him some exercise.

That way, he can go to the loo and isn’t on his own all day. There are lots of options and ways to work around things if you really have to leave your dachshund at home for the day.

Another thing you could do is check out the local dachshund groups on Facebook (there’s bound to be one). Sometimes, people in these groups offer to look after each other’s dachshunds if they suddenly need to go somewhere. Some of them are actually dog-sitters.

This could be a decent option if you’re really stuck because these people know and love the breed. It’s definitely worth looking into, just make sure you know exactly who you’re leaving him with.

So now you know how long dachshunds can be left alone, it’s up to you to make sure your dachshund is safe, happy and well-looked-after while you’re out of the house. As long as he gets enough exercise, attention and toilet breaks, and isn’t on his own for more than 4 hours at a time, he should be absolutely fine.

Read More
Is your dachshund scratching all the time? Is he biting and licking himself raw? Does he have a…
Read More
0
0
0

Read More
If you’ve had your dachshund pup for a few months, you may be thinking about getting him or…
Read More
85
0
1 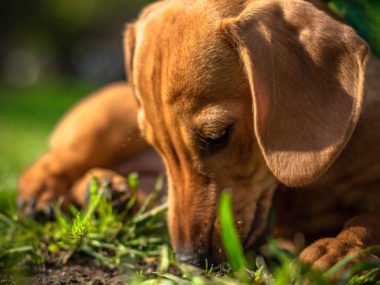